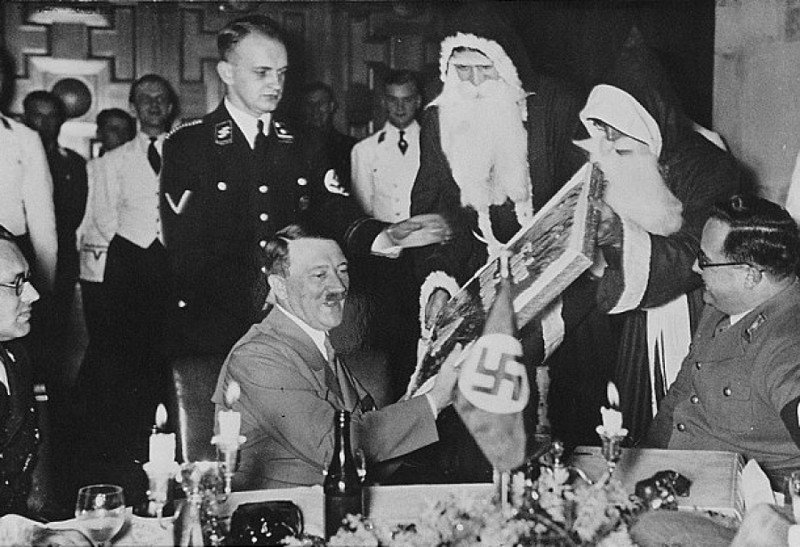 Santa Claus, the authoritarian leader of Christmas. With his face branded, moulded, and printed onto literally any object possible, he is the winter poster child. Christmas would cease to exist if we ever lost Santa Claus at the hands of the inevitable brutal heart attack that awaits him.

A Big Bearded Bastard in a bright red suit, wanting you all to lick at his boot.

Santa Claus, the authoritarian leader of Christmas. With his face branded, moulded, and printed onto literally any object possible, he is the winter poster child. Christmas would cease to exist if we ever lost Santa Claus at the hands of the inevitable brutal heart attack that awaits him.

Christmas, once upon a time, existed without Santa Claus, but are we now paternally protected in his warm mitten hands or are we in fact trapped inside his red iron fist? Jingle bells ringing as he shakes us down for money. So, did Santa orchestrate an undemocratic coup against Jesus and his Christmas ruling to begin a new global winter fascist regime?

Marxist work on material dialectics, tracing and predicting economic/political systems from Feudalism to Capitalism to Communism could be applied to the history of Christmas. How have we journeyed from pagan rituals, over to Jesus’ loving charity all the way down to capitalistic greed? Michael Cain’s Scrooge would love modern-day Christmas, lending out money to poor families that have been socially blackmailed into buying the newest Furby or whatever kids are playing with these days.

Lenin once stated that ‘capitalism in decay is fascism’, which is a worrying thought as we stand on this thin ice of capitalism. Global warming is quickly decaying the ice of capitalism, the cracks of which have given Santa the opportunity to plunge us down into his watery North Poll hell. The red deviled Santa has taken over.

So, how are we now at the mercy of the fascist St. Nick each coming winter? Let us go on a wonderful Christmas journey, and we will discover just as you need snow, carrots and a scarf to build a snowman, what you need to build an oppressive fascist Christmas system.

If Santa hadn’t entered into the world of fascism, his flare, charisma, and persona would most likely have shot him into the spotlight of an on-stage musical God. Without the path of fascism, I believe he would have taken the one to music, which is also littered with eccentric fascists like David Bowie as his ‘character’ The White Duke. In another world, we would have had Santa and Bowie singing Little Drummer Boy whilst the young Nazis march to the tune of the festive drum.

Santas eccentric character has been built from catchy tunes, a bizarre lifestyle hidden in the depths of the North Pole abandoning conventional clothes and vehicles. All to create an irresistible, charismatic character that is able to command an entire season with our gleeful consent. Everyone is wearing tinsel tinted glasses, not seeing the true monster they welcome into their homes.

Unless the democratic system that may have once excited has been struck from the record like a naughty child’s name from Santa’s perverted list of ‘good boys and girls’ then such a system has never existed. Santa sits on the throne of Christmas, a feudalist omnipotent Christmas King without any democratic say from the masses.

Without any form of democratic structure, but absolute power, Santa is able to dictate his capitalist ideology onto the masses with no opportunity for a new leader. Over the snowy horizon, there is no sight of an election, just the sleigh of a fascist which can only be brought down with a people’s revolution.

Brutal labour crimes overseas are easily forgotten in the West. Hidden under the avalanche of fast fashion and mass consumption, we bury all our worries under products. The current global capitalist agenda can only function with these abominations, so why would Santa be any different?

Similar to how Lush has given the squeaky clean illusion of happy-go-lucky staff while they actually work in such disgusting conditions, not even their products could mask the horror; Santa’s propaganda machine has worked magic.

We are all very aware that Santa has a Wonka style factory, ran by what would appear to be a slave race, but we continue in ignorant Christmas bliss. If we don’t care about workers in our own countries, why would we care for those in the North Pole?

The elves are completely subservient to Santa Claus, potentially due to generations of propagandic brainwashing and even possibly elf eugenics. Mating of the elves controlled by Santa in order to genetically mould a tiny, weak, servent race. Using his reindeer whip, Santa forces the workers to tirelessly work all year round then steals all the fruits of their labour.

If the whispers of a union or freedom were ever heard, it is obvious that Santa would take a no-nonsense approach similar to Elon Musk and crush any ideas of a revolt before they began with his blood-soaked candy cane. The Elves will be the first ones to lose their chains in the revolution, and most likely to light the warm winter fire of revolution, with Santa at the stake in the middle of the flames.

Santa Claus has a simple binary system of identifying friends and enemies, right and wrong. The Nice and Naughty List. This list is written in ambiguity and secrecy. There is no solid information on what the criteria is to be branded naughty or nice, creating a perpetual state of fear.

Under the fascist State of Santa (The SOS), the judicial system, mimicking the democratic system, is nonexistent. Judge, Jury, Executioner, Santa takes on the responsibility of each position, judging each and every person based solely on his capitalist ideology. The Orwell List (a list of suspected covert communists in England written by Orwell, aiding in the suppression of communism in England) is most likely a micro-version of Santa’s naughty list. Anyone that is suspected of damaging capitalist and fascist ideology will be deemed ‘naughty’.

The rumours and disinformation about the ‘red noses’ comes straight from the fascist playbook of the Nazis. Rudolph was viciously bullied by his peers in classic capitalist techniques of fracturing the working class in order to suppress community and therefore revolution. It would not be surprising to see posters warning of the ‘red noses’ hoarding sweets and treats from the other reindeer. Once Santa realised the usefulness of Rudolf, for guiding his sleigh, he allowed him to be accepted into normal social groups. Rudolf was only given worth once his capitalist captor found him productive.

Though we do not know how his surveillance system works, it has likely evolved from sleeper cells of elves disguised as children in the early days to a more advanced digital surveillance and tracking from our social media and various electronic devices, often ‘gifts’ from the man himself.

– Santa Claus is Coming To Town

The horrifying admittance not only of the perversions of our freedom and privacy, but the obvious threats that follow are terrifying. Is the prospect of possibly getting a new Tamagochi on December 25th worth the exchange of being under constant surveillance at every moment and in every location? We are unable to even mumble some words in our sleep without being recorded, so what hope is there for forming a resistance against this omniscient peeper.

Obsession with Crime and Punishment

With a naughty list with him at all times, Santa travels the world to throw down punishments to literal children. Who does Santa punish? The poor.

Christmas mornings for children of the elite are filled with presents and joy, the rich being rewarded for being rich. National corporate nepotism. While the children of working-class backgrounds, or even children that are working-class themselves due to the lack of child labour protection laws, is a morning of misery.

Santa punishes the poor for their heinous crime of poverty. Ironically, while the capitalists hate the poor, the working class are the only structure holding capitalism up. The children will either wake up to nothing or if the more theatrical side of Santa’s charismatic character is out, a sack of coal.

But why would a fascist give out free non-renewable resources as a punishment?

There are two theories (that, unlike the rest of this article that is based on sound academic resources, I have made up with no evidence)

Firstly, Margaret Thatcher and Santa Claus are playing some sadistic joke on the destruction of the working class in England due to mass closures of mines. These children in poverty are given coal, the object that was once the source of their families income, as a mocking reminder of the power of the capitalist state.

Secondly, small amounts of coal are given to the poor in order to maintain their need for non-renewable resources, Santa is just a lobbyist for energy companies. With growing concerns about climate change, created by and exacerbated by capitalism, people could begin to look for alternative energy sources. While the big energy companies will eventually swap over, they still have resources to sell and have invested huge amounts into new structures to gain access to resources. So for now, energy companies need to maintain the need for damaging non-renewable resources, that will eventually kill us all.

Fascism is corporatism, a coalition of authoritarian power and corporate greed, the interests of the state revolving around profits and not people.

The fascist, not only aids in maintaining our reliance on products, maintains the chain of supply and mass demand for corporate products with the biggest marketing scheme that is Christmas.

During Christmas, we become the products, just as in social media and advertising, Christmas will be used to gain insight on our consumerist desires but mainly to pavlovian condition everyone to directly link products with happiness. Christmas is just a giant advertisement, getting kids hooked onto the crack of capitalism. An entire season of the year that is consumed by consumption.

While Christmas was once an idea of family, community and sharing, these mad communist ideas from Jesus were attacked. In one corner, the martyred Jesus, and in the other Official Coca-Cola corner, Santa. With the backing of corporations, Santa beat Jesus and the real Christmas into submission. Coca-Cola knuckle dusters leaving perfect advertisement brands on the forehead of our messiah.

More than enough evidence exists to brand Santa Claus as a festive fascist. Our only hope is that Jesus rises once again, and leads a global permanent revolution to save the masses, our planet, but more importantly, to save Christmas. 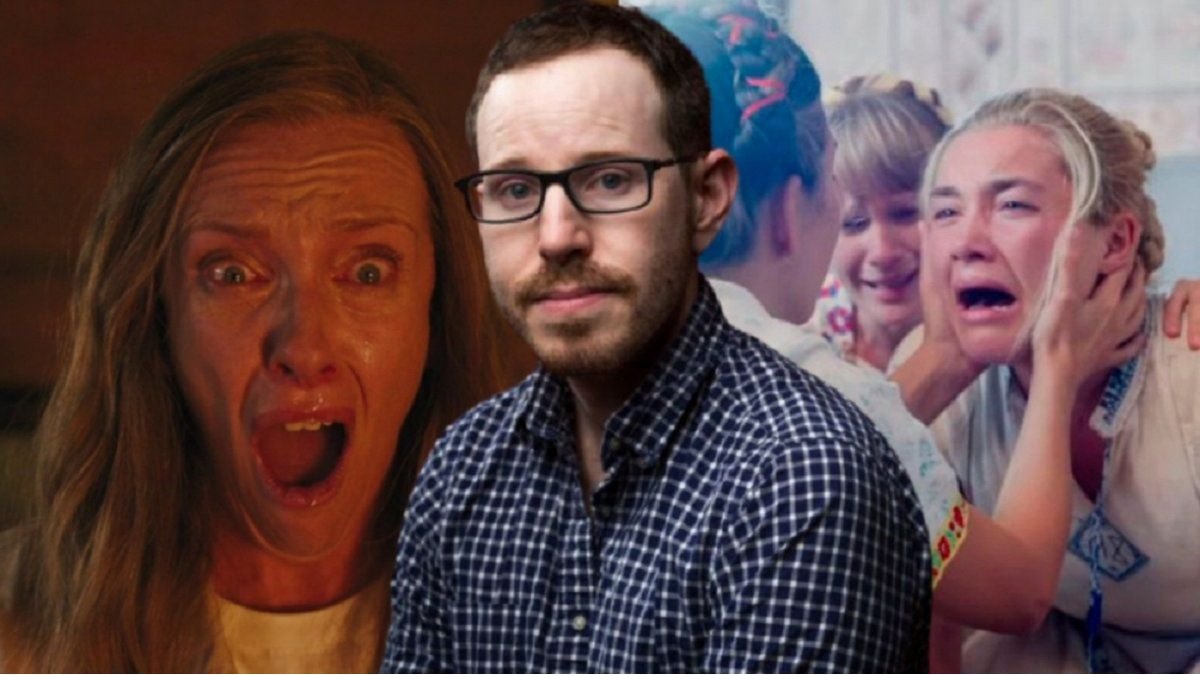